St Osyth’s Welll, also known as Uptown Well,  is situated alongside St James’ Church, a short distance from the Aylesbury Road. To find the well,  walk about 30 yards towards Aylesbury from outside the church and then turn left along the footpath.

History of the Well

The following is an extract from ‘The Story of Bierton’ by Mike Griffin and Robin Thurston, reproduced with the authors’ permission.

“St Osyth was a Saxon saint, apparently born in Quarrendon, the daughter of Frithwald, believed to be the sub-king of Mercia, who lived at Quarrendon and ruled an area stretching down to Surrey. Her mother was thought to be Wilburga, daughter of Penda, King of the Mercians. Like most other saints she had her holy well, but it seems that other places also laid claim to it. Leland, the venerated historian, wrote of it being between Aylesbury and Quarrendon; “a good myle from Aeilesbyry.””

Gibbs, in his ‘History of Aylesbury’ writes; “Unfortunately, no such well can now be traced in the immediate neighbourhood of or between Aylesbury and Quarrendon. If, however, we substitute Bierton for Aylesbury, which village has been and is still associated with Quarrendon, there would be a greater probability of discovering St Osyth’s Well.”

Legend has it that wherever the saint walked,  springs welled up and never ran dry.  The well in Bierton was named in her memory but unfortunately,  it is not the only one in the area; there is another spring near Dunsham Farmhouse,  across the A418 from St. Osyth’s Well which also claims St.Osyth as its patron.

Whatever the truth about its association,  the well has played a large part in the development of Bierton. There is good evidence that a small Roman settlement was built just to the north of the well in the area now covered by the churchyard and the school.

By the 16th. century, St. James Church and Bierton Manor House (no longer in existence) had been built around the well. Right up to the beginning of the last century, the villagers relied on the well for their water supply and the area around St. Osyth’s Well, the Church and the School was the focal point of the village.

The pond alongside the well has never been known to run dry. The water may not be particularly good to drink now but the pond was used by Bierton villagers until the early part of the last century for growing watercress.

By the 1990s the well had fallen badly into disrepair. Money was raised locally and grants were obtained from the Countryside Agency and the Millennium Lottery Fund to restore the well. 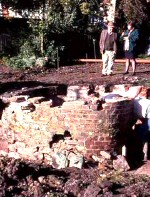 The aim was to restore the well as closely as possible to
its condition during Victorian times. The work involved removing

and replacing most of the brickwork and landscaping the surrounding area. 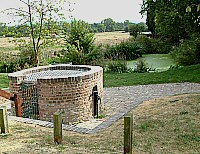 The restoration was completed in May 2001; the opening ceremony was performed collectively by the Bishop of Buckingham, our local MP John Bercow, the Bierton School Council and the 777 Conservation Group. The Bishop and MP gave short speeches, the School Council removed a flag from the information plaque and the 777 Conservation
Group released some wild life into the pond.

In 2018, the Well underwent further renovations to open up and clear the pond and surrounding area, also exposing the natural spring. New benches, wildlife feeders and boxes, a waste bin and an information board have been provided. Bulbs and seeds have been planted which we hope will come to fruition in the spring and summer.

The funding for this project came from the Gib Lane Solar Farm Fund, organised by Grantscape Limited.

The project was run by Brian Small, our resident handyman/caretaker, who did a lot of the work himself.

Pictures of the renovated well and surrounding area can be found below. 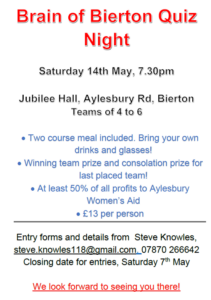